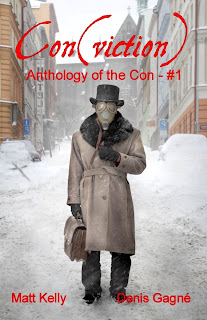 Well there goes my New Year's resolution to Blog at least once a month. Jeez, what is it, April already? Oh, well, its not the first of my resolutions to last as long as a Red Shirt in a Star Trek episode. Anyway, on with the show.

Earlier this year my story Damaged, was published in an anthology from Gothic City Press. The collection is called Conviction: Anthology of the Con. It came out quietly in January, so much so that I didn't even know it was out until March. It's available on Amazon in Kindle and paperback.


A flash story I wrote called The Fall of The Feast will appear later this year in the pages of Barnyard Horror, an anthology with four legs from James Ward Kirk fiction. And Dark Moon Digest will run my story How to Mount Fairies for Display in their special Young Adult Issue coming out this summer, fall, or winter, I don't really know. But this sale was kind of a victory for me as I have been trying to get this piece in print for a while. Based on the stor…
Post a Comment
Read more
More posts